With the 2018-19 winter season approaching in just a few months, winter sports enthusiasts are no doubt busily preparing their equipment and making plans to head for their favorite slopes. To most people, the term ‘winter sports’ brings to mind locales such as the Colorado Rockies, Utah, Northern California, or various other ski resort areas generally associated with the western United States. Others may think of such notable European winter sports regions as the Swiss Alps, northern Italy, Norway, Austria, and Switzerland. However, one of the fastest-growing and increasingly well-regarded winter sports locations in the eastern U.S. is the beautiful Snowshoe Resort WV.

Situated in the picturesque Allegheny Mountains chain of the ancient Appalachian Range, Snowshoe is located in West Virginia’s Pocahontas County in the small village of Snowshoe, near the towns of Elkins and Lewisburg. Now in its 43rd consecutive year of operation (opened in 1974), Snowshoe Resort WV had previously been the site of extensive logging activity for over half a century. 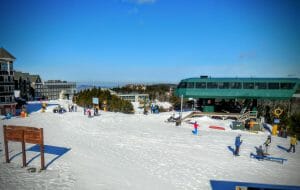 A successful ski resort developer, ‘Doc’ Brigham, took notice of Snowshoe’s unlimited potential, and although it took several years before his ambitious vision began to fulfill the promise he had hoped for, he was ultimately rewarded as Snowshoe Mountain soon became one of the East Coast’s most popular winter sports destinations. During the 1990s, Snowshoe underwent several expansion upgrades and improvements, most notably the development of a surrounding village that included condominiums and other commercial ventures as well as new ownership.

Snowshoe Mountain – An Island in The Sky 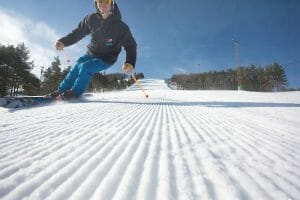 Snowshoe Resort WV varies in elevation from roughly 3,300 to 4,850 feet above sea level and offers skiers 244 acres of skiable terrain that features every imaginable skill level from the inexperienced novice beginner to the extremely challenging veteran. Snowshoe also provides night skiing in its Silver Creek area, and with 14 professionally staffed chairlifts that are capable of transporting more than 23,000 skiers an hour, annoying waiting time is virtually nonexistent. Snowshoe’s winter climate (average January temperature is 28° F.) provides absolutely near-perfect conditions for winter sports, receiving an average of 180 inches of annual snowfall, and even in the nearly unheard occasion of a ‘snow drought,’ the resort has 100% snow-making capability, ensuring plenty of white powder for their visitors to enjoy.

Plenty of FUN at Snowshoe Mountain!

With 60 ski runs (the longest a thrilling mile-and-a-half), Snowshoe offers not only a unique skiing adventure guaranteed to satisfy the most demanding of enthusiasts, the surrounding mountain scenery is of the breathtaking variety that is certain to please visitors who have an appreciation for unmatched sightseeing opportunities. 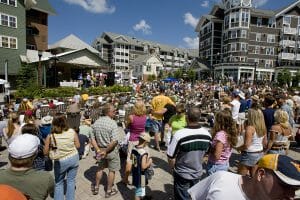 The Village at Snowshoe Resort WV 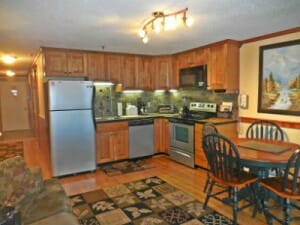 At the quaint and charming Village at Snowshoe Mountain, visitors will find more than ample options when it comes to dining and shopping among the many retail outlets and a wide variety of restaurants, ranging from cozy home style to fine upscale cuisine. Lodging at Snowshoe Mountain is also top-rate and plentiful, whether your stay is for a day, overnight, a weekend, or for an extended period. The many locally-operated inns and lodges are devoted to the comfort and enjoyment of their clientele, and for the adventurous visitors, Snowshoe-area cabin rental services feature numerous options, amenities, and reasonable rates along with the not soon-to-be-forgotten experience of rustic living.

Within a short to medium drive from most East Coast metropolitan areas, Snowshoe Mountain is easily accessible, full of family activities, and 100% ready to provide winter sports enthusiasts with a guaranteed satisfying adventure that will seem to not last nearly long enough.

For affordable lodging options, visit Mountaintop Condos – they feature a variety of one, two and three-bedroom condos situated just steps away from Snowshoe Village. The Ballhooter high-speed chair-lift is located just outside their back door. Parking and free-wi-fi are included with each rental.