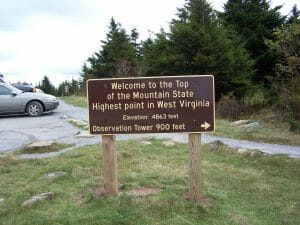 1) Spruce Mountain:   Spruce Mountain is the highest of the West Virginia mountains. It is located in the Spruce Knob-Seneca Rocks National Recreation Area in the Monongahela National Forest. This is in Pendleton County. There are over 75 miles of hiking trails and a small lake on the west side that is stocked with trout for fishing. On the mountain resides two campgrounds for campers, the larger of the two close to the lake. On the top of Spruce Mountain is a lookout tower that will let you see everything around you for miles.
2) Back Allegheny Mountain: This mountain is 18 miles long and 8 miles wide. It is located in Pocahontas County and rises up from Greenbrier River Valley. Its highest elevation is 4,843 feet. Bald Knob, the pinnacle of the mountain, is the final destination for Cass Scenic Railroad State Park, a railroad that takes passengers up the mountain.
The Cass Scenic Railroad is 11 miles long and goes through the former company town of Cass and up back the Allegheny Mountain. Passengers 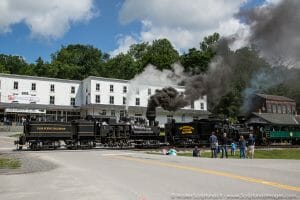 ride on retrofitted log cars in a former logging train up the mountain. Cabooses can be rented out for private parties. Houses along the Cass Scenic Railroad and a cabin on Bald Knob can also be rented out. The railroad tour allows visitors to take in the amazing scenery of Back Allegheny’s red spruce forests without compromising the sensitive and highly protected environment.
Bald Knob’s observation platform gives visitors a gorgeous view of Greenbrier Valley. Sometimes, when the weather is clear, you can even see all the way to Virginia, which is twelve miles away.
3) Cheat Mountain: This rugged ridge is 50 miles long and five miles wide. Of the West Virginia mountains, it has the highest point at 4,848 feet above sea level. It runs the entire length of Randolph County. Cheat Mountain has a strong history in the American Civil War. It is the location where General Lee carried out his first offensive battle. As a valuable strategic location, the mountain was both occupied by Confederate and Union camps during the war and several battles and skirmishes were fought.
Cheat Mountain is also home to the threatened Cheat Mountain salamander, a salamander only found on Cheat Mountain and a couple of other nearby mountains. It is a small salamander with a black or dark brown color that is flecked with silver.

A popular tourist attraction on Cheat Mountain is Snowshoe Ski Resort located in the village of Snowshoe West Virginia. It has over 200 acres of skiable land. Snowshoe West Virginia is best known for skiing and other winter activities, but it also has mountain bike trails, a golf course, and wedding/ceremony facilities. Every year, Snowshoe West Virginia also hosts the Grand National Cross Country Racing Event. There are over 1,400 condominiums and lodge hotels on the resort, perfect for those wanting to get some skiing or mountain biking time in.
4) North Fork Mountain: This majestic West Virginia Mountains highest point is 4,588 feet. It is capped in quartzite and unlike a lot of the neighboring mountains, it is a dry mountain with mixed oaks, pine trees, and mountain laurel instead of red spruce forest.
The only settlement on North Fork Mountain is Monkeytown, a small hamlet with less than fifty people. However, there are vacation rental homes and small cabins spread out across the entire mountain, as well as Future Generations Graduate School located just under the ridgeline. The North Fork Mountain Trail is a hiking trail over 23 miles long and follows the 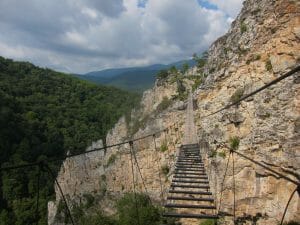 mountain’s northern crest. Outside magazine named this trail the best trail in West Virginia.
North Fork Mountain is the former home of the defunct community “Smoke Hole“, located on the east side of the mountain, which has a rich and exciting history. Moonshiner and local troublemaker Cal Nelson lived in Smoke Hole. His story is immortalized in A Place Called Smoke Hole by Bardon Shreve. 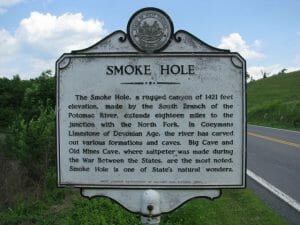 Smoke Hole became defunct in the early 20th century. In 1930, unusually dry weather started a major forest fire that raged across the entire mountain, vanquishing small trees and undergrowth. It lasted eleven days, only stopped by rainfall. After that, the Forest Service put a fire suppression program in place, including fire wardens, a fire tower, and fire-fighting teams made of locals. Unfortunately, with the undergrowth and small trees gone, the livestock of the Smoke Holers did not have enough to feed on. Smoke Holers blamed the Forest service and a few locals who intentionally started a forest fire out of spite. It took them five days to put out and it consumed 10 square miles of the mountain. Smoke Hole is gone now, but the ruins of the watchman’s cabin and tower can still be seen today.
5) Shavers Mountain: This rugged ridge is 35 miles long. Several peaks exceed 4,000 feet above sea level. There are two beautiful natural areas on its northern and southern ends respectively: Otter Creek Wilderness and Gaudineer Scenic Area. 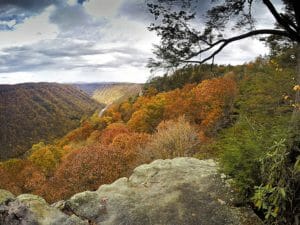 Otter Creek Wilderness is a bowl-shaped valley that has over 42 miles of hiking trails. Its longest, Otter Creek Trail, is 11 miles long. It is the home of the Shavers Mountain Spruce-Hemlock Stand, which is 68 acres of virgin forest. The Gaudineer Scenic Area is a national natural landmark. It is 140 acres big and has a small portion of virgin forest that was spared and preserved by the timber industry in the early 20th century. The mountain is named for Peter Shaver, whose grandfather, Ellis Wyatt was the first settler on the mountain. Shaver was killed by Native Americans on the mountain in the nineteenth century. The Shavers Mountain trail is only 10 miles long, but it is often intense and difficult. However, it is also very rewarding, with majestic views.
These five West Virginia mountains offer excellent hiking trails, gorgeous views and several other attractions outdoorsmen of all kinds will love.