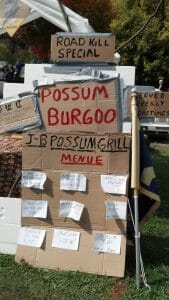 Featured on the Food Network, the Travel Channel, and the Discovery Channel, the annual Snowshoe WV Roadkill Cookoff is a unique culinary event that is returning to the Snowshoe Mountain area once again for 2017. In the Cook-off, amateur chefs from all over the country compete to prepare a dish in which the key ingredient is “any animal commonly found dead on the side of the road.” For mainstream roadkill aficionados, this could include deer, rabbit, and turkey. Edgy and innovative chefs might offer exotic dishes such as groundhog, opossum, squirrel, snake, and crow prepared with curry, sriracha, chipotle, or other spices to complement the bold flavors of the meat. In case you were wondering, none of it tastes like chicken.


Starting on September 29, the annual Autumn Harvest Festival and West Virginia Roadkill Cookoff at Snowshoe Mountain should be a popular destination for both locals and tourists, with up to 10,000 people expected to attend each day through the 30th. If you are not competing in the Roadkill Cook-off, bring a good appetite, purchase a taster’s wristband, and get ready to sample the entries starting at 10:30 a.m. Be sure to put in your bid for the $150 People’s Choice prize to be awarded to the best-tasting and most attractively presented roadkill dishes.


This isn’t your grandma’s roadkill casserole. Expect to find solid hometown classics such as squirrel gravy over biscuits, but prize-winning entries of previous Snowshoe WV Roadkill Cookoff have been creative, including Chinese “Chef Boar-R-D” Noodles, Smashed “Pota-doe” Patties, or “I Wanna Iguana Nachos.” For the linen-napkin crowd, the Roadkill Cook-off competition has featured such dishes as “Venison from Venice,” a braised venison with lightly sauteed portobello mushrooms, toasted pecans, lime-infused rice, and cilantro pesto. 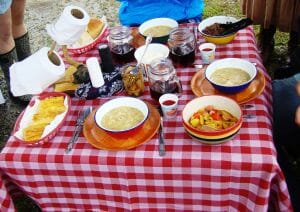 Thinking about competing in the Roadkill Cookoff yourself or with a team? If you’ve ever passed a bear carcass in the woods and thought, “I bet this would go so well with a teriyaki glaze,” or come up with some tastily innovative solutions to the problem of the rabbits in your garden, the Snowshoe West Virginia Roadkill Cookoff might be the contest you’ve been waiting to join. Entry is free and the complete contest rules are available online. The top cash prize is worth $1200, and all participating teams not otherwise receiving an award will get $100. Don’t you think you should try? Anyone can make chicken. It takes a true adventurer to eat crow.


In evaluating your entry for the Roadkill Cook-off, the judges are looking for are taste, originality, presentation, and showmanship. 25% of the dish must be wild game, and, depending on the original location of the food, points may be deducted for asphalt or gravel. Luckily, all judges, the rules warn us, “have been tested for cast-iron stomachs.” Thankfully, they also have “sworn under oath to have no vegetarian tendencies,” since very few blocks of tofu are killed by passing cars. Make no mistake: The Roadkill Cook-off is definitely a festival for people who appreciate the value of good, hearty meat.


The Autumn Harvest Festival and West Virginia Roadkill Cookoff is a great event to take in West Virginia’s unique blend of humor, rock-hard hometown toughness, and enthusiastic celebration of all that the beautiful fall season in this state has to offer. Come on over to Snowshoe Mountain for some one-of-a-kind arts and crafts, some outstanding local bands, and above all, this unique and unforgettable taste experience this September 29-30, 2017.