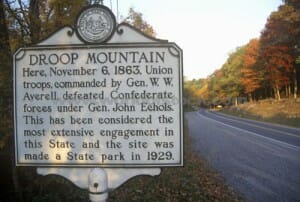 Droop Mountain Battlefield is a historic site located in Pocahontas County, West Virginia. It commemorates the battle that took place there during the Civil War.

On November 6, 1863, Brigadier General William W. Averell led his Union troops on a joint raid of Confederate railways in Pocahontas County, West Virginia. He joined with Federal troops in a second attempt to drive back the Confederate Army and disrupt the Virginia-Tennessee Railroad. Brigadier General John Echols held Averell and his troops back throughout the morning by blocking the highway with artillery but with the addition of Federal infantry in the afternoon was forced to retreat south into Virginia with his remaining army. This engagement was one of the largest battles in West Virginia during the war. Averell succeeded and Confederate resistance in West Virginia gave way.

On November 7, General Averell sent his infantry back to Beverly with prisoners and livestock then traveled east with his mounted troops to the Potomac River to re-supply. He led a third attack on the Virginia-Tennessee Railroad in early December and this success along with further operations in the spring of 1864 drove the remaining Confederate troops out of West Virginia.

The state purchased the site in 1928 and dedicated it the following year as a memorial to the soldiers who fought and died there. In 1935 the Civilian Conservation Corps built an observation tower on the site along with a system of hiking trails throughout the scenic area. Droop Mountain Battlefield is part of the Civil War Discovery Trail which exists to teach visitors about the history of the Civil War.

The Division of Parks took over administration of the site in 1937 and in 1974 a Civil War museum was constructed from a forest division cabin. The museum is open seasonally. Every other year on even-numbered years in October the battle is reenacted on the site. There have even been reports of ghosts and voices being seen and heard on the battlefield.

Droop Mountain Battlefield has miles of trails and a scenic overlook as well as picnic tables, a lookout tower, and play areas. It is located on U.S. Route 219, Near Snowshoe WV, in the southern part of the state.

For nearby lodging, visit https://mountaintopcondos.com.