Snowshoe, West Virginia was the location for the fourth annual Ballhooter Spring Break Festival from March 11-13, with performances by some big name entertainment. Bud Light sponsored this year’s festival, which featured Brooklyn recording artists, American Authors, with their recent hits, “Best Day of My Life” and “Believer”. Snowshoe WV is the backdrop for this annual festival that attracts hundreds to the area each year.

The weekend in Snowshoe WV began on Friday night with the Shamrock Shuffle theme in full swing. After the pre-party in The Connection Nightclub, there was a T-shirt design contest and a prize wheel for guests twenty-one and over. At 10pm the Davisson Brothers Band rocked the house with their unique combination of bluegrass, country and southern rock. Music has been in the Davisson family for generations and they sing of their West Virginia roots and family back home. They featured a raucous rendition of their new single, Jesse James. The evening concluded with a silent disco party at Shavers Centre Plaza. 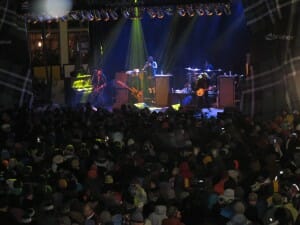 Saturday began early with a yoga class and a free Bloody Mary bar. Great way to start the day! At noon, a Budweiser sponsored games event was held at the Boathouse. They served bratwurst, burgers and beer while the patrons enjoyed bowling and snowball games capped off with a bikini contest. At 7pm on the Village stage, the Midwestern sounds of Lissie filled the air. Even though she is a California based artist now, her music has the quality of her rural upbringing. The range of her talent was on display as she transitioned from her well known song “Hollywood”, to the more down home essence of “Ojai”.

Lissie’s stellar performance was followed by an exciting show from American Authors that brought Snowshoe WV to their feet at the Village Stage. The internationally known band was formed at the Berklee College of Music in Boston, then moved to Brooklyn after graduation where they struggled for many years before the success of their first album, the optimistic “Oh, What a Life”. They were the highlight of the weekend as they rocked the Village Stage through the night. For those who preferred a change of pace, Reverend Peyton’s Big Damn Band was bringing the house down at the Connection Nightclub with their country blues style.

The Ballhooter Spring Break in Snowshoe WV is a party everyone should experience. Make plans to attend and you will be sure to have a great time!