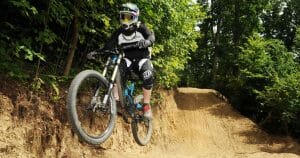 During the winter, Snowshoe Mountain in West Virginia is known for its skiing, with hundreds of acres of ski trails available. During the warmer months of the year, the mountain resort has an extensive network of mountain biking trails. This month, those trails will be the site of the 2016 USAC Collegiate Mountain Bike National Championships.

The competition is divided into several events, including an endurance race, a dual slalom, a downhill race and a team relay, with squads consisting of no more than four riders, with at least one male and one female. To be eligible for any race type, a rider must have completed at least three races in their conference competition. Further eligibility requirements for the endurance races note that the riders must rate high enough in their conference to fill one of the limited number of spots given to each conference in the endurance competition.

This year’s event takes place over three days, following a day for registration and practice on Thursday, October 20. Then Friday, October 21 through Sunday, October 23 see he contestants competing all day long, with practices starting at 7:30am each day. Events scheduled to take place on Friday include short track and downhill seeding. Cross country takes up the bulk of the morning schedule on Saturday, followed by the downhill finals in the afternoon. The weekend’s first awards ceremony takes place at 7pm on Saturday. The team relays kickstart the competition on Sunday’s slate, with the dual slalom finals following. Following the dual slalom competition, everyone will head to the Village Center for the final awards ceremony that are set to close out the weekend’s activities. Other than the team relay, each event is divided into four divisions — male varsity, male club, female varsity and female club.

Fort Lewis College and King University took the division 1 and division 2 titles, respectively, in the team omniums at the 2015 national championships, which were also held at Snowshoe. The individual omnium titles in 2015 went to Luke Vrouwenvelder (University of North Carolina) and Sofia Gomez Villafane (Fort Lewis College) in division 1, while Robert Rimmer and Kaysee Armstrong (both King University) took the male and female crowns, respectively, in division 2.

It promises to be another exciting year as USA Cycling returns to the Mountaineer State to stage this year’s Collegiate Mountain Bike National Championships to showcase some of the nation’s top collegiate riders.